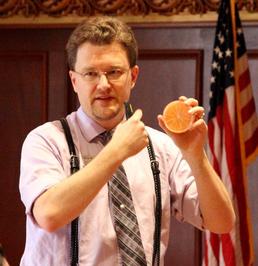 Photo of Kym by Eva Donohoo

Dr. Kym Buchanan is a professor of education at the University of Wisconsin-Stevens Point. He started his career as a high school teacher and went on to earn his PhD in Learning, Technology, and Culture. His leadership positions have included associate dean of a nationally renowned school of education. Kym's teaching, research, and outreach have spanned psychology, technology, and diversity. He's currently exploring connections among happiness, courage, and creativity. Kym has been with his wife since 1994 and they have two daughters.

My path in life has been anything but boring. As a kid, I lived in Salt Lake City, Utah. When I was 12, we moved to Portland, Oregon, which I think of as my home town. I earned my Bachelor's of Arts in Chemistry from Reed College in 1998, and my Master's in Teaching from Concordia University in 1999. I taught high school for three years in Tigard, Oregon, including English language arts, speech, algebra, and business technology. I was also the assistant coach of the speech/forensics team. Next, I worked as a researcher at a federally-funded regional educational laboratory for one year, where I focused on open source software and other open models.

In 2003, I moved to Lansing, Michigan, to earn a PhD in Learning, Technology, and Culture from the College of Education at Michigan State University. My interdisciplinary studies included education, psychology, and media (especially games). In 2006, I finished my dissertation and started my position at UWSP. In addition to earning tenure and full professor, I've been elected to several top leadership roles in shared governance, and I've worked part-time as a senior aide to our provost and chancellor. From January 2016 to January 2019, I served as Associate Dean and Head of our School of Education. While I was very successful in this role, I missed my teaching and research, so I didn't apply for a second term.

My recreations include video games, novels, short stories, movies, and TV. I particularly enjoy modern fantasy and military science fiction. Partly because I spend a lot of time sitting in front of screens, I also prioritize diet and exercise.